In their recent note Standard and Poor’s paint a gloomy picture of the sukuk market, and pin the decline of issuance in 2015 on the decision by the central bank of Malaysia (Bank Negara Malaysia; BNM) to stop issuing sukuk.

As has been raised before, this is a flawed calculation to judge the health of the sukuk market. Short term sukuk such as that which was stopped being issued by BNM is the same money being recycled.

Sukuk re-issued every month such as a one billion Malaysian Ringgit issuance would falsely represent an annual issuance of 12 billion when in fact it is one billion Ringgit issued 12 times. A better barometer of market sentiment is to take a wider view and look at the issuance of international benchmark sukuk, which in 2015 witnessed two South East Asian Sovereigns print record equalling issuances with Malaysia issuing a 30 year sukuk (the longest maturity for a Sovereign), and Indonesia issuing a $2 billion sukuk whilst achieving an order book of over $6.8 billion.

Furthermore at the start of 2015, S&P stated the below on their Islamic finance website (content still remains on the page). Unfortunately for S&P, they were off by about $40 Billion in 2015 (based on their own numbers of  $63.5 billion sukuk issuance in 2015). 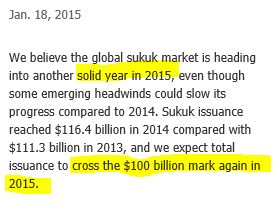 With a track record like this, it is no wonder why many corporate and sovereign sukuk issuers, such as for example Government of Dubai do not bother to get any rating agency to rate their sukuk.