U.S. Dollar investors are thinking twice about subscribing to the United Kingdom’s debut Sovereign Sukuk due to the U.K. Pound’s (Sterling) soaring value, one Gulf-based Islamic banker said, but the deal is still likely to be heavily oversubscribed with the likelihood of it being upsized.

With the Sukuk to be denominated in Sterling, the case of Sterling strength is illustrative of the challenges London faces as it seeks to be the Western hub of Islamic Finance; that of the excess liquidity London seeks to tap is strongest in the energy exporting U.S. Dollar linked markets of the Gulf Cooperation Council (GCC) and Malaysia. Negative movements in currency valuations for the U.S. Dollar against Sterling will make U.K. based investment decisions unattractive for such U.S. Dollar based investors.

Whilst in the short-term Sterling does seem to be overbought against the Dollar, it is widely expected Dollar strength will emerge towards the end of 2014 thereby making subscription to the Sukuk (likely to be issued around October 2014) more attractive to GCC and South East Asian subscribers, hence the delay in the Sukuk issuance may be a blessing.

Since the announcement of the intended issuance of the debut UK Sovereign Sukuk by Prime Minister David Cameron at the end of October 2013, Sterling has surged in value trading last week at yearly highs of over 1.68 against the US Dollar, up from 1.59 at the time of the announcement and seen in a slightly wider context up from 1.55 just a month prior to the announcement.

Whilst this near 8% rise may be welcomed in some quarters from a macro UK economy perspective (lower fuel costs leading to lower inflation), it makes U.S. Dollar based investors think twice about subscribing to the UK Sovereign Sukuk, for whom subscription to the primary offering costs around 8% more than it would have done in September 2013. This 8% hit is made more stark when we assume a maturity of 5 years for the Sukuk, in which case it will likely yield a similar lowly amount to conventional Gilt’s at around 1.97%.

Whilst the UK Sovereign Sukuk is aimed at domestic consumption from a growing domestic Islamic Finance services industry, seen from a wider context the secondary aim of the issuance would have been to attract demand internationally and whilst some interest has been expressed publicly, the strong Pound will dampen interest from the key GCC and South East Asian markets, all of whom are tightly linked to the US Dollar, either in terms of a fixed exchange rate, or a managed float against the basket of currencies of which the US Dollar would be the core component. 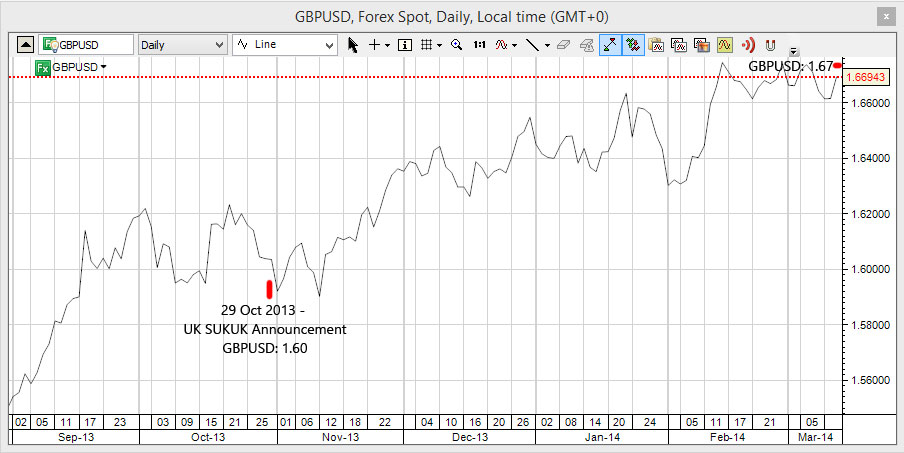 Despite this, strong domestic Sterling demand will ensure the UK Sukuk will be heavily oversubscribed, and indeed similar to Turkeys Sukuk debut, there is a likelihood the deal maybe upsized as demand will greatly outstrip supply.