The aggregate primary issuance of bonds and sukuk by GCC entities, including Central Banks, totalled USD48.13 billion in H1 2015, a 15.19% decrease from the total amount raised in H1 2014.

A report published by the Kuwait Financial Centre “Markaz” highlighted the trends pertaining to aggregate issuances in the GCC region during H1 2015.

In the first half of 2015, the Central Bank of Kuwait raised USD12.85 Billion via fixed income instruments which represented just under half of Central Bank Local Issuances (CBLI) across the GCC.

CBLI are Fixed Income securities issued by GCC central banks for the purpose of regulating levels of domestic liquidity. During H1 2015, a total of USD28.29 billion was raised by the GCC central banks, namely by the Central Bank of Kuwait, Bahrain, Qatar, and Oman. The Central Bank of Kuwait raised the highest amount with USD12.85 billion, representing 48.8% of the total amount raised by CBLIs through 36 issuances, followed by the Central Bank of Bahrain, which raised a total of USD6.69 billion, 47.13% higher from USD4.55 billion raised in H1 2014.

The GCC Sukuk and Bond Market

The GCC bonds and Sukuk market is composed of bonds and sukuk issued by GCC Sovereign and Corporate entities (including Government related entities GREs and Financial Institutions FIs) for financing purposes and denominated in local and foreign currencies. A total of USD19.83 billion was raised in the GCC bonds market in H1 2015, a decline of 19.29% from USD24.57 billion raised in H1 2014. 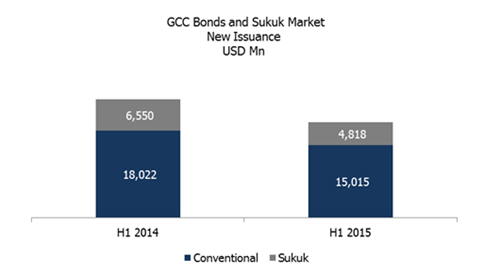