The Bloomberg Malaysia Sukuk Ex-MYR Total Return (BMSXMTR) and Dow Jones Sukuk Total Return (DJSUKTXR) indices gained 0.13-0.33% to end at 102.4 and 156.5 respectively, with weighted average  yields fell 1.1bps to 2.59%. Gainers were led by SHARSK ’24, QATAR ’23, MAFUAE ’25 and SECO ’23. Brent extended gains to the second week, settling 10.3% higher to USD38.7/bbl following Energy Information Administration’s (EIA) report decline in supply of 25,000 bpd to about 9.2m bpd in US shale production in December. On the other hand, Moody’s downgraded the sovereign ratings of Bahrain to Ba1, and placed it on review for further downgrade together with other GCC countries — Abu Dhabi (Aa2), Kuwait (Aa2), Qatar (Aa2), Saudi Arabia (Aa3) and United Arab Emirates (Aa2).

The review will be based on the extent of the impact of low oil prices on economic performance and government balance sheet. Thus, the yields in the GCC region will increasingly sensitive at least in the two months of review, in our opinion.

Islamic Development Bank (Aaa/AAA/AAA) via IDB Trust Services issued a USD1.5bn 5y sukuk at profit rate of 1.775% (MS+50bps). The initial price guidance was between MS+50/55bps, the profit rate is much lower than the March 2015 issuance (ISDB 1.831% 12/3/20 USD1bn, MS+8bps), although at higher spread over mid-swap. Reaffirmed by its AAA ratings, IDB’s sizeable issuance demonstrates its strong credit and financial position. The IDB complex widened overall during the week, nevertheless on a year-to-date basis, IDB 18-20 tightened by an average of 22bps.

Axiata (Baa2/BBB+/NR) plans to arrange investor meetings commencing on 7 March for a dollar sukuk under Axiata SPV2’s multi-currency sukuk MTN programme. Sime Darby (Baa1/BBB+/A) was downgraded to Baa1/Neg from A3 to reflect extended pressure on its financial profile and delays in its debt reduction plans.

In the MYR space, BGSM Management (A3) priced MYR300m 10y IMTN at 5.35% while Gulf Investment Corporation (AAA) is targeting a MYR450m 5y IMTN offering and may launch the deal as soon as this  week. On the ratings front, MEX II’s MYR1.3bn sukuk murabahah programme and MYR150m junior bonds were assigned preliminary ratings of AA-/Sta and A-/Sta. The proceeds from the issuances will be mainly used for construction cost and interest during construction of the 16.8km Lebuhraya Putrajaya-KLIA (MEX extension) project. Alam Maritim Resources’ outlook was downgraded to Negative, on weakening business prospects as a result of reduction in its order book amid challenges faced from the current oil and gas industry. 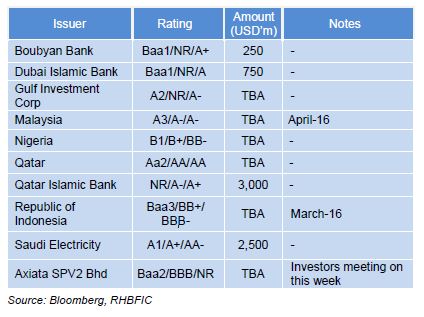 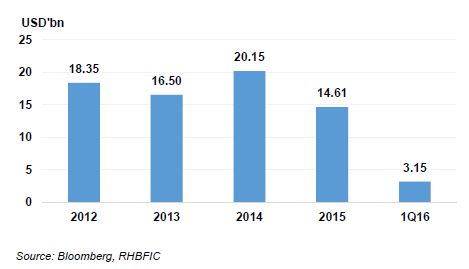