Meanwhile, IMF cut GCC’s GDP growth forecast to 1.8% in 2016 (from 2.75%) as the oil-dependent region reduced public spending in response to a higher fiscal deficit of 11.6% of GDP. Fed held interest rates unchanged and remained ambiguous about raising rates in June due to mixed global economic and financial developments as well as low US inflation.

Saudi Arabia unveiled its structural reform plan, based on oil price assumption of USD30/bbl that aims to diversify its economy away from oil dependence. The plan includes (a) selling off a 5% take in Saudi Aramco through an IPO at USD2trn; (b) boosting private sector share of GDP from 40% to 60% of GDP by 2030; and (c) raising non-oil government revenue from SAR163bn to SAR1trn by 2030. Its M3 money supply growth decelerated at -0.4% YoY in Mar-16 from -0.9% in Feb- 16, which adjusts in line with the fall in net foreign assets to SAR2.19trn from SAR2.17trn. Accordingly, Saudi’s CDS widened 5.5bps to 155.0bps. Elsewhere, Turkey’s trade balance deficit widened to USD4.95bn from USD3.17bn, with its CDS trading at 240.3bps (+2.8bps).

Moody’s and S&P assigned a Ba1/Sta and BBB-/Sta rating to Ezdan Holding, reflecting its sizeable and large investment properties portfolio which provides stable recurring cash flows. This came alongside the approval of a USD2bn sukuk issue by the company’s general assembly. In the MYR space, MEX II (AA-) priced MYR1.3bn 5y-18y sukuk at 5.1%-6.4% with proceeds earmarked for the highway extension of Maju Expressway from Putrajaya to KLIA. Perdana Petroleum (AAA(FG)) issued MYR635m 1y-5y IMTN at 4.30%-4.90% for refinancing of its MYR615m borrowings.

1MDB defaulted on the USD1.75bn 5.75% bond issued by 1MDB Energy (Langat) Limited (Langat Notes) in 2012 after missing USD50.3m interest payment due from International Petroleum Investment Company (IPIC). Due to the default in the Langat Notes, it triggered cross defaults on 1MDB Sukuk MYR5bn 2039 and MYR2.4bn Bandar Malaysia Sdn Bhd (BMSB) Sukuk due between 2021 and 2024 – totaling to MYR7.4bn (USD1.9bn). The default may also trigger a “material adverse effect” clause on the MYR800m loan from the Social Security Organization (SOCSO) loan.

The risk remains contingent despite the higher prospect of the government digging into its fiscal pocket to pay this indemnity. Nevertheless, additional risk should be added onto Malaysia’s government guaranteed debt which rose to 15.4% of GDP as at end 2015 from 12.8% in 2011 (2014: 15.5%). 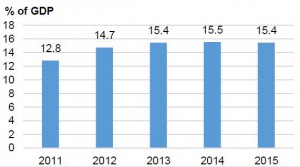