The decline in crude oil prices has weakened the fiscal positions of GCC states. Despite the mounting pressure to implement subsidy reforms, budget spending remain broadly unchanged at c.44% of GDP as GCC states accelerated economic diversification from oil. Without such structural changes, the economic prospect of the region may remain at threat given an unlikely recovery in crude oil prices, at least in the near term. Nonetheless, multiyear expansionary policies might not be sustainable as fiscal buffers have been significantly weakened, mainly due to lower oil revenues.

Measured by the years of fiscal buffers and fiscal breakeven oil prices (refer to Chart of the Week), Oman (A1/A-/NR) and Bahrain (Baa3/BBB-/BBB-) seem vulnerable to prolonged expansionary policies and would exhaust their buffers in less than five years, building up pressures on their banks with notably reduced deposits inflows and increased borrowings by governments and government related entities. Saudi Arabia (Aa3/AA-/AA), on the other hand, has low government debt (1.6% of GDP) and sizeable reserves of USD726.8bn in 2014, allowing more room for debt issuance at the event of any budgetary shortfalls. Sovereign credit profile for Kuwait (Aa2/AA/AA) remains the most resilient, followed by Qatar (Aa2/NR/NR) and UAE (Aa2/NR/NR). 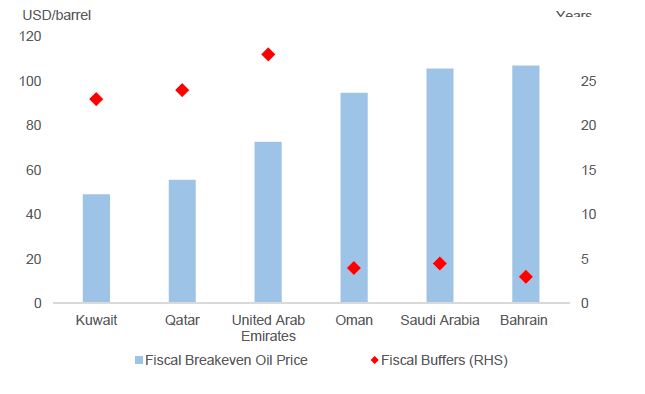 Chart of the Week: Uneven fiscal strengths in GCC region.

In the 2nd Measure of the First Priority of the 2016 Budget, to further invigorate the capital market, the government announced a tax deduction on issuance costs of SRI Sukuk as of 2016. Currently, tax incentives are given on Sukuk issuances of Mudharabah, Musyarakah, Ijarah, Istisna’, Murabahah, Wakalah and Bai Bithaman Ajil from year of assessment 2003 to 2015, while Ijarah and Wakalah structures have been extended for another three years from 2016 to 2018. The SRI tax incentive is proposed for five years (2016 – 2020) on Sukuk issuance costs, given that it is approved by the Securities Commission (SC). In addition to the SRI Sukuk tax incentive, the government also announced the extension of double deduction or further deduction of retail Sukuk for another three years (2016-2018) in order to encourage more investors’ involvement in the capital market. The additional costs include professional fees relating to due diligence, drafting and preparation of prospectus, printing cost of prospectus, advertisement cost of prospectus, SC prospectus fees, Bursa Malaysia processing fee and initial fee as well as Bursa Malaysia new issue crediting fee, and primary distribution fee. These deductions are included on additional issuance costs of Sukuk under Mudharaba, Musyarakah, Istisna’, Murabahah and Bai’ Bithaman Ajil based on Tawaruq, and further deduction on additional issuance costs of Sukuk under the principles of Ijarah and Wakalah.

Incentives will consolidate Malaysia’s position in the Sukuk market

Malaysia is already the largest Sukuk market accounting for about 60% of the global Sukuk market. Khazanah issued its first tranche of MYR100m of its MYR1bn SRI Sukuk in May this year, which raised funds for its Trust schools programme where proceeds of the Sukuk will be channeled to Yayasan AMIR. Nevertheless, we may see weaker demand for SRI Sukuk if compared to corporate or sovereign issuances, as investors would have to accept lower yields; to recap, Khazanah’s SRI Sukuk issuance attracted c.1.3 times demand, lower compared to other Sukuk.