There has been a growing interest in the past few years towards socially responsible investment (SRI) sukuk or green sukuk. A number of sukuk in this class has been issued in the global market to finance environmental-friendly projects.

The growing trend toward SRI sukuk or green sukuk is mainly due to the natural progression of sukuk market, the growing awareness of investors toward ethically and socially responsible investment and the stricter capital requirements for the bank to finance infrastructural projects. This report looks at the future of SRI sukuk or green sukuk as well as the challenges surrounding its growth.

There has been a growing interest in the global market toward SRI instruments. One of the areas that are normally associated with SRI is the environment and its preservation. Green bond therefore becomes a common instrument to serve this aspect of SRI in the global market. For example, in 2007 the European Investment Bank (EIB) launched a EUR 600mln climate awareness bond focusing on renewable energy and energy efficiency. 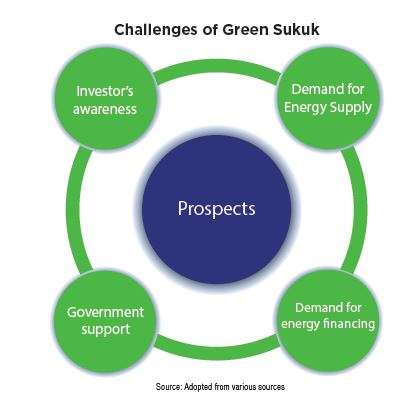 Not withstanding the positive prospects for green sukuk, the future of green sukuk is hindered by a number of challenges and constrains. First, the secondary market for green sukuk is very small due to small number of investors holding sukuk funds and other institutional investors which traditionally require robust secondary market for meeting the investors’ liquidity expectations. Second, the absence of the standard and verification system for performance measurement of green bonds/sukuk. Third, green sukuk may expose to higher risk profile. This is because many environmental friendly projects involve a sophisticated degree of new technology due to construction and operation of green technologies. Fourth, the difficulty to assure investors that sukuk proceeds will be used for projects with economic value, while meeting accepted and credible green standards.