Emerging East Asia’s sukuk market held firm in 2Q15 despite headwinds from challenging developments in the global economy. The region’s sukuk market managed to post modest growth in the first half of the year, amid uncertainties surrounding the anticipated interest rate hike by the United States Federal Reserve and, more importantly, falling oil prices that affected oil-producing economies who are active participants in Islamic financial markets. Growth was largely driven by the rising acceptance of sukuk as an important source of financing as demand for infrastructure funding continues to grow and interest from nonmainstream sukuk markets begins to advance. 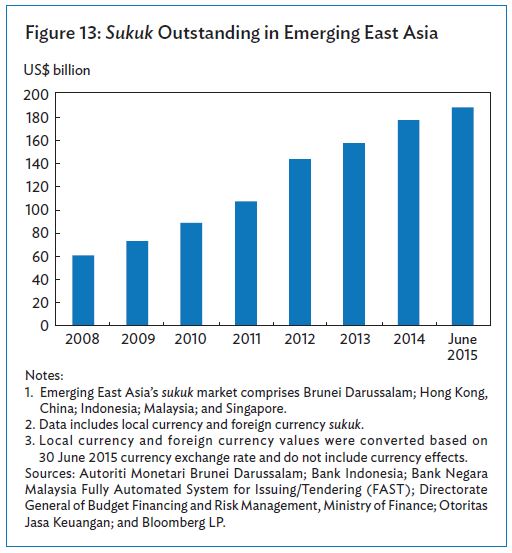 Malaysia is home to the largest sukuk market in emerging East Asia and the entire world. It dominates the region’s market, accounting for an 86.5% share of the region’s total sukuk stock at end-June. It was followed by Indonesia with a share of 11.1%, while all other emerging East Asian sukuk markets (Brunei Darussalam; Hong Kong, China; and Singapore) together only represent a 2.3% share of the total.

At the end of June, the region’s outstanding sukuk were primarily denominated in Malaysian ringgit, which had an equivalent value of US$154.9 billion and represented an 83.1% share of the region’s total stock. Other markets in the region have also issued MYR-denominated sukuk, taking advantage of Malaysia’s pioneering efforts in creating a well-developed regulatory framework and market infrastructure for shari’ah-compliant financial products. The Indonesian plantation firm Bumitama Agri issued MYR-denominated bonds twice in 2014. In Singapore, all FCY corporate sukuk have been issued in Malaysian ringgit, including issuances by Golden Assets International and First Resources. Even Hong Kong, China’s Noble Group issued MYR-denominated sukuk in 2012 and 2013. 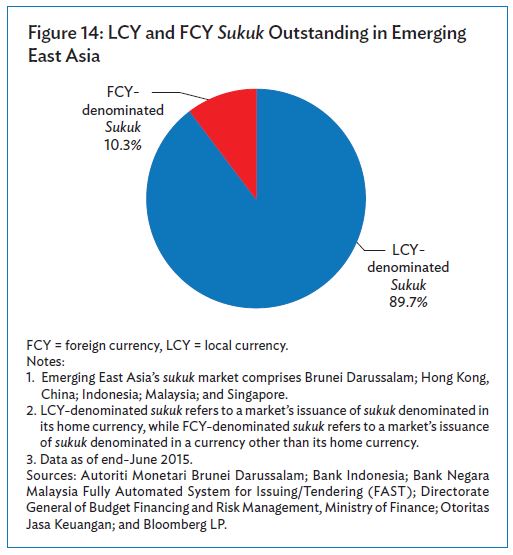 Next to the Malaysian ringgit, the US dollar was the region’s currency of choice for sukuk issues. Outstanding US$-denominated sukuk totaled US$16.0 billion at end-June. Indonesia is the most active market in terms of US$-denominated sukuk, with a total outstanding amount of US$7.5 billion The Indonesian government regularly issues global sukuk as part of its budget financing plan and instrument diversification strategy. It also issues global sukuk to support the development of the global Islamic financial market and to create a pricing benchmark for global sukuk issues.

At the end of June, the Indonesian government’s outstanding global sukuk stood at US$7.0 billion. The only other US$-denominated sukuk from Indonesia was the US$0.5 billion issuance of state-owned airline operator Garuda Indonesia in 2015. Malaysia’s aggregate US$-denominated sukuk totalled US$6.5 billion at end-June. Of this amount, global sukuk issued by the government comprised US$3.5 billion and sukuk issued by corporate firms comprised the remaining US$3.0 billion.

The remaining US$2.0 billion was accounted for by Hong Kong, China, whose government sold its first sukuk in September 2014 through the issue of a US$1.0 billion 5-year sukuk at a profit rate of 2.005%. The sukuk was structured following the wakalah Islamic principle. The issuance was an important milestone for Hong Kong, China in its foray into the Islamic financial market. The government issued another US$1.0 billion 5-year sukuk in June 2015 that carried a profit rate of 1.894%. IDR-denominated sukuk accounted for a 7.0% share of the region’s total outstanding sukuk at end-June.

All of which were issued by the Indonesian government through the auction of Islamic Treasury bills (SPN-S) and Islamic Treasury bonds, known as Surat Berharga Syariah Negara (SBSN), and the issuance of retail sukuk. The government auctions Islamic Treasury instruments on a bi-monthly basis. Sukuk denominated in Singapore dollars and Brunei dollars only accounted for an aggregate 1.3% share of the total.

Issuance in Singapore dollars came from both Singapore and Malaysian corporates, while BND-denominated sukuk were mainly issued by Autoriti Monetari Brunei Darussalam, a statutory body acting as the central bank. At the end of June, emerging East Asia’s outstanding government sukuk reached US$89.2 billion, while corporate sukuk stood at US$97.2 billion (Figure 16). Unlike the conventional bond market, where the government sector dominates issuance, in the sukuk space, it is the corporate issues that account for a larger share. Nonetheless, government sukuk have steadily advanced over the years, with a share of total sukuk outstanding nearly doubling from 27.5% in 2008 to 47.8% at end-June. Corporate sukuk accounted for a 52.2% share of the region’s total sukuk stock during the review period.

Only the markets of Malaysia and Singapore had a larger share of corporate sector sukuk vis-à-vis the government. In the case of Singapore, its entire stock of sukuk outstanding came from the corporate sector.

Sukuk issuance in emerging East Asia recorded a modest decline in 2014 to US$78.5 billion from 2013’s US$79.5 billion and 2012’s high of US$89.2 billion. While still robust, issuance volume has been on a downtrend since the 2013 “taper tantrum” when emerging markets experienced large capital outflows in response to statements from the Federal Reserve that it planned to wind down its monthly asset purchases. In the first half of 2015, total sukuk issuance volume in emerging East Asia reached US$26.9 billion. 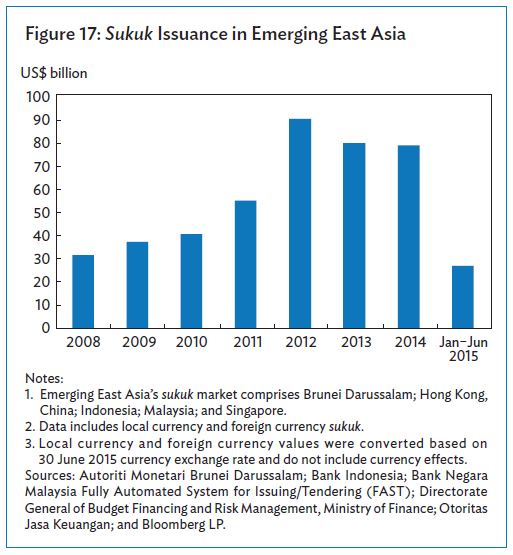 Malaysia led the decline as its issuance volume has steadily dropped, particularly for government sukuk. In the first half of 2015, Malaysia ceased issuance of shari’ah-compliant Bank Negara Monetary Notes (BNMNs), which accounted for 55.4% of total LCY issuance in 2014. However, issuance of shari’ah-compliant BNMNs resumed in August. Bucking the declining trend in issuance volume was Indonesia, where sukuk issuance volume has steadily risen from only US$1.5 billion in 2008 to US$7.0 billion through the first half of 2015. Hong Kong, China also increased its total issuance volumes in 2014 and 2015 as a result of the government’s successive issues of US$1.0 billion sukuk.